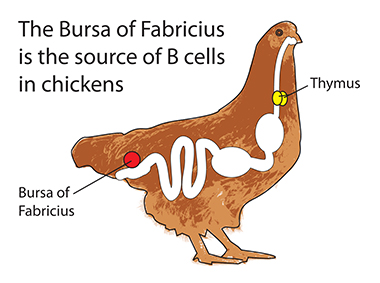 The Bursa of Fabricius is the source of B cells in chickens.

The B lymphocyte lineage of cells is responsible for antibody production. Most of us assume that B lymphocytes, or B cells, got their name because they mature in the bone marrow: "B" for bone marrow. However, this is not really the case. The "B" in B cells comes from the Bursa of Fabricius in birds.

The Bursa of Fabricius (BF) was first described by Fabricius ab Aquapendente in the 1600s. BF is a sac-like structure that sits over the terminal portion of the gut in birds. To date it's only known function is the production and maturation of B cells.

In the 1950s and 60s Bruce Glick at Ohio State University was studying the function of the BF. In an effort to determine its function, he routinely bursectomized chickens within the first 3 weeks after hatching, the period in which the bursa grows rapidly.

A graduate student at Ohio State named Timothy Chang was looking for some chickens to immunize in order to produce antibodies against Salmonella. The only chickens available at the time were Bruce Glick’s bursectomized chickens. When Chang immunized these chickens with Salmonella O antigen, many of the birds died. None of the survivors produced any antibodies. This was the seminal observation that led to the discovery that B cells were responsible for antibody production. Glick and Chang published their work in the journal Poultry Science in 1955 and 1956. As a result an entire field of immunology was opened up, leading to the elucidation of many of the major tenets of cellular immunology, including the roles of the thymus and bursa (bone marrow in mammals) in the development of the two major lineages of immune cells, T cells and B cells.

1. Ribatti D, Crivellato E, Vacca A. 2006. The contribution of Bruce Glick to the definition of the role played by the bursa of Fabricius in the development of the B cell lineage. Clin. Exp. Immunol. July;145(1):1-4.