An Introduction to Multiplex Immunohistochemistry - Part 1 of 4

With the advancement of immunotherapeutics, the urge to understand the tumor microenvironment has never been more pressing. Immunohistochemistry is a powerful tool used to examine protein expression, distribution, and activation in situ. Antibodies specific to an antigen of interest are used to detect the antigen in thin sections of flash frozen or formalin-fixed paraffin-embedded tissue. Visualization of the antigen is achieved using either an enzymatic reaction that induces chromogen precipitation at the site of antibody-antigen binding, or fluorescent reporters. Fluorescent reporters may be directly conjugated to the primary antibody used to detect the antigen of interest (direct immunofluorescence), or may be attached to a secondary antibody that detects the species-specific primary antibody (indirect immunofluorescence). The latter is more common, as it achieves more sensitive antigen detection.

Historically, this technique has been performed individually for each marker of interest. However, molecular histopathology has recently been shifting from single-marker immunohistochemistry towards multiplexed marker detection. Multiplex immunohistochemistry, also called multiple immunolabeling, or multiplex immunostaining, can maximize the amount of data acquired from an individual sample. This is critical in instances where sample is limited, such as a tumor biopsy or other clinical specimen. Unlike next generation sequencing and mass spectrometry, multiplex immunohistochemistry also allows for examination of spatial arrangement of proteins of interest as well as protein interaction/co-localization.

Chromogenic detection is compatible with multiplex immunohistochemistry to a degree, but there are multiple benefits to indirect labeling using tyramide-based fluorescent detection. This tyramide-based method involves deposition of fluorophore-conjugated tyramide at the site of the antigen of interest, effectively amplifying the signal. Tyramide signal amplification (TSA) enables detection of particularly low abundance targets, as well as enhances the fluorescence signal. Importantly, TSA also allows the use of unlabeled primary antibodies, with the flexibility of using multiple antibodies raised in the same species. 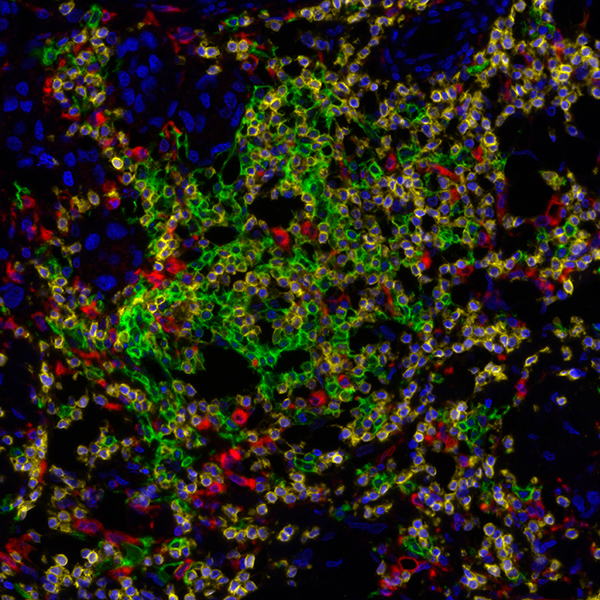 Another significant benefit of tyramide-based fluorescent detection lies in the permanent nature of the tyramide-antigen bond, accomplished through its covalent bonding with tyrosine residues on or in proximity to the antigen of interest. The permanence of this binding allows for heat-mediated removal of antibodies, but preservation of the fluorescence signal associated with the antigen of interest. In this manner, sequential applications of targeted antibodies can be utilized without concern for the cross-reactivity that would otherwise be expected when using multiple antibodies from the same host species. Use of fluorophores with distinct non-overlapping excitation and emission wavelengths facilitates visualization of each unique target protein. Multispectral imaging allows isolation of flurophores with partially overlapping spectra and subtraction of tissue autofluorescense.

Recent advances in multiplex immunohistochemistry and multispectral imaging facilitate accurate simultaneous analysis of multiple tissue markers. For example, detection of markers of both proliferation and autophagy within intestinal tissue can aid accurate assessment of epithelial turnover. Clinically, understanding of the tumor microenvironment, and subsequent selection of appropriately-targeted therapies, can be augmented by profiling and localizing immune checkpoint proteins. The applications of multiplex immunohistochemistry are numerous, and span clinical, translational, and basic research applications.