Navigating the Sea of Blots

The terms Western blot, Southern blot, and Northern blot are so widely known, accepted, and used that we refer to them simply as Westerns, Southerns, and Northerns. Ever wonder how they got their names?


It all started in 1975 when a guy named Edwin Southern reported a method for detecting specific DNA sequences by separating them by electrophoresis, transferring them to a membrane, and probing the "blot" by hybridization with a radioactive DNA probe. This technique quickly became known as Southern blotting in homage to its inventor. After that, all subsequent probe and detection methods were named as a play on the original name "Southern". Northern blotting was the next to be described, making its debut in 1977, followed by Western blotting in 1979. To date, those are the only names that have caught on and become widely accepted, although many other blotting techniques have been developed (see table below). For example, there is an Eastern blot, used for detecting post-translational modifications of proteins. The techniques used in Eastern blotting were actually available as early as 1976, but the name Eastern blotting never really caught on and remains controversial to this day. There is also a Southwestern blot, Far-Western blot, and Far-Eastern blot, and even some other, more obscure designations. 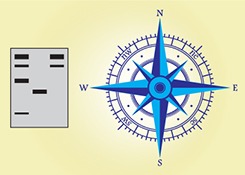