Western blotting is a widely used analytical laboratory technique that is used in molecular biology to detect proteins within a mixture.

During a western blot experiment, samples containing a mixture of proteins are separated based on their size using gel electrophoresis. Although commonly used as a qualitative method to detect and identify proteins, western blotting can also be used semi-quantitatively.

However, there are two main steps involved with separating any mixture of proteins within a sample.

Measuring the total protein concentration of samples is also important, as it will impact the quality of results from electrophoresis and detection stages.

Separation of proteins is performed by loading prepared samples to the gel and applying an electric field.

The protein mixture is then separated, based on chemical and physical properties of the molecule. This separation forms distinct bands on the gel for further analysis. 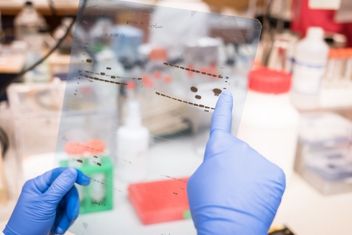 Our western blot protocols help to guide you through your next experiment.

After separating a mixture of proteins, the resulting protein bands must be transferred to a membrane to allow for further preparation stages.

Transfer to a Membrane

The separated proteins must then be transferred to the membrane.

It is important to choose the correct membrane material for the analysis, with popular options including nitrocellulose and PVDF. This will vary on whether you opt to use a wet or semi-dry blotting method. This will also impact the requirements of the buffer solution that will be required.

Once transferred, a blocking reagent is required to prevent non-specific protein binding. Careful considerations must be made when determining which antigen-antibody interactions to block with regards to your target protein.

After separating, transferring and preparing the antigen-antibody sites, the use of primary and secondary antibodies allows for identification and detection of the target proteins.

Prepared protein samples are then treated with a primary antibody. This antibody creates a specific binding to the target protein. Further treatment may be required with a secondary antibody, which binds to the primary antibody and aids in detection.

The choice of secondary antibody that is used for western blotting methods, will determine the detection method required. Utilizing chemical properties of the antibody - such as chemifluorescence or chemiluminescence - target proteins can be identified, and sometimes quantified.